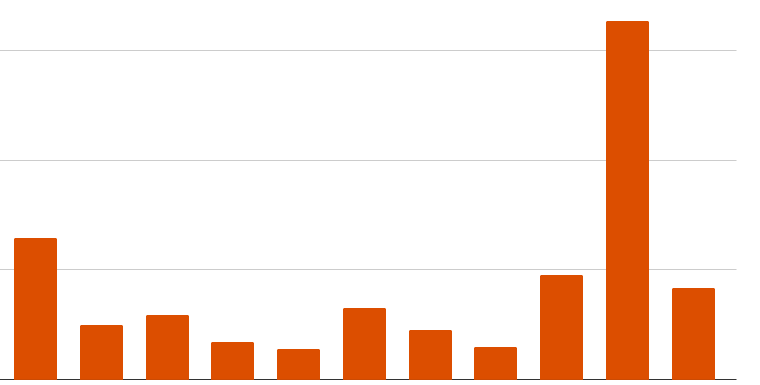 The effect of capturing multiple games on engagement results

By Tinus le RouxSeptember 7, 2017September 8th, 2017featured
No Comments
I remember it well. It was back in 2010, the week after we created our first Fancam and I was sitting in a boardroom showing off the new breakthrough… After the oohs and aahs settled down, one of the more accomplished attendees offered an assessment: “This is very cool and your engagement numbers are amazing, but people won’t engage with it once it’s not new anymore. That’s just the way tech works. Sell your business as soon as you can” I intuitively knew he was wrong, but I didn’t have the experience or expertise to explain why. Seven years and a 1100 international events later we still get versions of this critique, but experience and data have helped validate that initial intuition and we’re now able to show that the prediction was in fact wrong – and able to explain why. So, if you’re wondering: allow me to explain the difference between content and tech:

People don’t engage on Facebook because it’s a new piece of technology, they do so because the platform addresses a social need. Similarly, Fancam is not a tech solution, but a social solution empowered by tech. This is an important distinction, because it explains why the engagement numbers have remained so high, despite all the changes in the world of technology since our inception. Fancams work because people care about pictures of themselves and as long as they do, our engagement numbers will remain high.

Teams and sponsors often plan their game day activations as if fans also work in sports business and attend almost all the games. They don’t. In fact it seems the exact opposite is true. We recently used facial detection technology to confirm that only 2% of the fans at one of our clients attended more than 50% of their games. Sitting in the meeting reporting on the result, someone working for the team poignantly said: “So we basically have a completely different crowd from one game to the next? That means we shouldn’t be changing our whole game day presentation as often as we are. We’re getting bored of seeing the same big screen videos but if we keep it the same for 10 games, 80% of our crowd would have only seen it once!” The same is true of Fancam.  Fans engage from one game to the next, not only because of the tribalism inherently driving the engagement, but because you essentially have a different crowd at every game.

So let’s say you do have a team that has the exact same crowd every week. You don’t, but just for argument sake let’s say you do. Why do fans look at and share images of themselves more than once? To answer this question we need to understand the social need addressed by selfies – and it’s relatively simple: Selfies allow people the opportunity to convey their identity. This is me! (at the game we lost, the game we won, the game where we had good seats, where we had bad seats, the one I attended with my dad, that day in the snow ….). In the same way people don’t say “Well, I’ve posted a selfie before, no need to do that ever again”, they don’t say “I’ve seen my picture on the game from last week, no sense in seeing how I look in this one”. Fancam is not an ID photo, it’s a hyper contextual image allowing fans to convey something about who they are. “I’m a Patriots fan and look, there I am!”

When you understand these three factors: not being a tech solution, the changing nature of crowds and the social and psychological drivers of engagement, the following stats will come as no surprise. The Broncos We captured 6 consecutive Denver Broncos games for Bud Light. With the exception of 2nd game, the team promoted the Fancams via Facebook and by including it in an email newsletter. While we cannot share the actual engagement numbers, we can say that more people visited the Fancams than actually attended the (sold out) games.

The Patriots We’ve been capturing all Patriots home games since 2015 and have seen a 30% year on year growth in engagement stats. The graph below represents engagement numbers for one season and shows them to be consistently high. View the Fancams here: patriots.fancam.com

The Rangers We capture all NY Rangers games via permanently installed camera rigs in Madison Square Garden. The graph below represents a group of 8 games which were all promoted in exactly the same way: a single Facebook post the day after the game. The average engagement numbers were consistently high, while the 7th game is great example of what it looks like when a Fancam goes viral. View the Fancams here: rangers.fancam.com

The short summary: Fancam is hyper contextual content, empowered by cutting edge technology. That’s why it delivers engagement every day of the week. Psychology, not technology.